About the Precision Slicing Knife

In 1968, our family owned a French-made DUX classic knife by Victorinox, a design from a time where performance and quality were prioritized by default. The experience was such that it was my mother’ long time favorite slicer before it was handed to me. Regrettably, after 50 years of service, the knife itself was starting to show its age.

The team that first patented this breakthrough slicer in 1953 assured that the DUX remained exclusive until 1973, when the patent expired. While the Swiss company still proposes a version of the classic DUX, the modern ergonomics of this messer not only redesigned the adjusting rails but also featured a plastic cutting guide instead of the original aluminum. The new model had become quite priced too, and I was not too keen on non-metallic materials that I viewed as bendy. Buying it was not my preferred option, and I did not want to consider a bulky rotary slicer either. What I really wanted was to rejuvenate my old model!

What to do? In 2017, through a crowdfunding project, we re-designed the BaouRouge’ Precision Slicing Knife based on the principle of its 1968 precursor, working on ergonomic and comfort while leaving the original mechanical principle intact, through a new handle and screw mechanism. The resulting version, now in its third iteration – each time taking into account extensive user’ feedback, is a modern, manual food slicer that performs even better than the original!

The third edition is recognizable by the premium high-carbon 5Cr17 stainless steel blade and a redesigned non-slippery hexagonal thumbscrew for easier & safer handling, even with wet hands.

This improved version has it’s name fully registered with the French institute of industrial property (INPI) and has passed the mandatory food safety tests required for sale in US and EU markets (FDA compliance).

Conventional wisdom says that life can be anything you want. I wanted to travel and see the world, and I did. For nearly 30 years I studied and worked across continents, clocked miles over oceans, split my life between orient and occident.

In 2014, after a downsizing, I felt that I could do something different than pursue another corporate role. I had long been a keen amateur chef, I was capable with my hands, and I wanted to see more of my family instead of customers at airports. I also felt I knew about tools that were timeless, useful, even beautiful, and that I could work to enhance and promote them whenever possible.

In Provençal language, Baou Rouge means Red Hill, from the red earth of Provence in Southern France. This beautiful region is where I have my roots and where I always cherish returning. My grandfather built his family home on a Baou Rouge near Toulon and I decided to adopt the name for my activity.

For ancient Chinese, seals were symbols of high office and used by officials to authenticate documents. Seals of Approval were also used by emperors on everything from government business to art. Paintings, for instance, were often adorned with several seals beyond that of the original creator. Successive owners would routinely affix their personal stamps to indicate that the piece was worthy of their royal collection.

Having lived over 20 years in Asia, I entitled myself to some cultural appropriation and made my Logo, BaouRouge to look like an emperor’s stamp, with the red ink, 9 squares for each letter of the name BaouRouge, every one made of straight lines similar to traditional characters. Today, I proudly affix my seal of approval on products that I find worthy, beautiful and bring genuine benefits. Those are products I designed myself from the ground up, or enhanced from an earlier design, making them absolutely unique. I am a user first and foremost, and I listen to feedback.

BaouRouge is a small brand, but I believe in it on a giant scale. I am also not alone in this venture. I am happy that BaouRouge directly supports families instead of shareholders. Your patronage buys groceries and sends kids to school. That is invaluable!

Thank you for your interest! 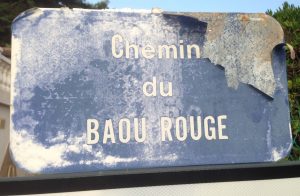